First things first – let’s take a step back and ask the question, “what exactly is qualitative data?” Well, qualitative data refers to data that is “not numbers” (don’t worry, that’s not the hot take of this post!). In other words, it’s not the stuff you count or measure using a fixed scale or complex statistics and math. So, if it’s not numbers, what is it? 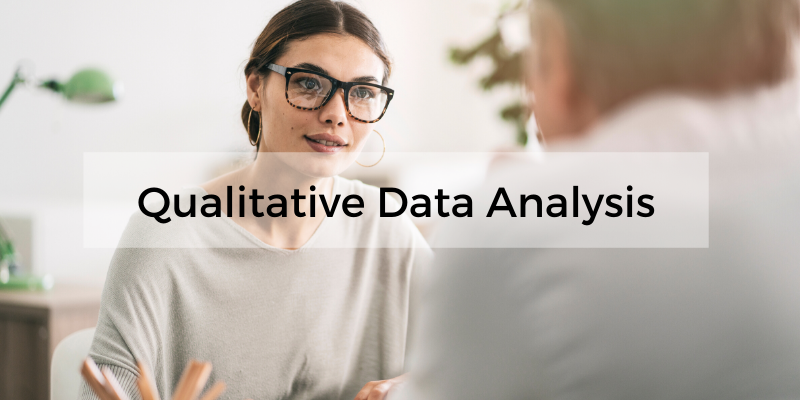 Words, you guessed? Well, sometimes, yes. Qualitative data exists in the form of interviews, focus groups, or open-ended surveys; or in the interpretation of images, documents and videos. Simply put, qualitative analysis focuses on words, descriptions or ideas, while quantitative research focuses on numbers. Qualitative data explores the “softer side” of things. For a detailed discussion of qual vs quant, check out this post.

So, qualitative analysis is easier than quantitative, right?

Not so fast there! In many ways, qualitative data can be incredibly challenging and time-consuming to analyse and interpret. At the end of your data collection phase (e.g. your interviews or focus groups), which itself takes a lot of time, you may have pages and pages of texts or hours of audio to work through. You may have subtle nuances of interactions or discussions which have danced around in your mind, and which were scribbled down into partial thoughts in messy field notes. Then you need to make sense of it all. But how? Well, that’s what qualitative data analysis (QDA, if you’re fancy) is all about.

In this post, we will explore qualitative data analysis at a high level by looking at the general methodological approaches used for dealing with qualitative data. We’re not going to cover every possible qualitative approach and we’re not going to go into heavy detail – we’re just going to give you the big picture. These approaches can be used on primary data (that’s data you’ve collected yourself) or secondary data (data that’s already been published by someone else).

Without further delay, let’s get into it.

There are many different types of Qualitative Data Analyses, all of which serve different purposes and have unique strengths and weaknesses. So, how do you choose the right one? Well, selecting the right analysis largely depends on your research question. For example:

In each of these cases, different types of QDA would be suitable.  Here, we will look at five of the most popular methodological analyses employed in QDA, and explain where they may prove most valuable. What are the 5 qualitative analysis methods, you ask?

The most common qualitative data analysis methods (at least the ones we see) are:

Let’s take a look at them…

Content analysis is possibly the most common and straightforward type of QDA. It is used to evaluate patterns within the content (words, phrases or images) or sources of communication, such as from photographs in newspapers through to political speeches. You could, for instance, identify the frequency with which an idea is shared or spoken about (like the number of times a Kardashian is mentioned on Twitter…). Or you could be identifying patterns of deeper underlying interpretations (for instance, by identifying phrases or words in tourist pamphlets which highlight India as an ancient country).

Because content analysis can be used in such a wide variety of ways, it is important to go into the analysis with a specific question. Large amounts of texts (transcribed or original) are re-grouped into codes, summarised into categories and themes, and possibly even tabulated. Because of this, content analysis is one of the more quantitativ-ey and deductive of these QDAs, looking a little more like frequencies (numbers) of things than other analyses.

Content analysis is dynamic and widely useful, but it’s not without its drawback. It is very time consuming (requiring lots of reading and re-reading of the texts). Additionally, it has been accused of losing important nuances in communication, for instance, if focusing on words and phrases as the source of codes.

Narrative Analysis is all about listening to people telling stories and digging into what that means. The assumption here is that stories form a functional purpose. They fundamentally help us make sense of the world. Therefore, by analysing stories and the ways in which they are told, we are unpacking the ways in which people (the storytellers) deal with, cope with and make sense of reality.

You can use narrative analysis to explore whether HOW something is being said is important. For instance, it may reveal something about the story-teller (e.g. a prisoner trying to justify their crime), or if is influential in their success (e.g. through the ways entrepreneurs talk about the struggles in their careers) or ability to cope with a situation (e.g. cancer patients telling stories of hope).

However, the Narrative Approach too has its weaknesses. Sample sizes are usually very small due to the time-consuming process of capturing narratives. Because of the small sample size, as well as the multitude of social and lifestyle factors which can influence a subject, the narrative approach can be quite difficult to reproduce in subsequent research. This means that it is difficult to test the findings of some of this research.

Discourse means written or spoken language or debate. So, discourse analysis is about analysing language in its social context. In other words, analysing language (for example, a conversation, speech, etc) within the culture and society it takes place. For instance, you could evaluate how a janitor might speak to a CEO, or how politicians speak about terrorism.

To truly understand these conversations or speeches, the culture and history of those involved in the communication is important. For example, a janitor might speak more casually with a CEO in a company which emphasises equality among workers. Similarly, a politician might speak more about terrorism if there is a recent terrorist incident in the country.

So, as you can see, using discourse analysis, you can identify how culture, history or power imbalance (to name a few) has an effect on the way concepts are spoken about. Because there are many potential social influences in how we speak to each other, the potential scope for investigation using Narrative Analysis is vast. For the same reason, it is very important to have a very specific question in mind when analysing the data and looking for patterns and themes.

Grounded Theory is the methodology where the intention is explicitly to create theory using data, through a series of “tests” and “revisions.” For example, trying to figure out what factors might influence students to read a blog post on QDAs…

After extensive evaluation or examination, a general hypothesis or pattern could emerge (e.g. graduate students are more likely to read this kind of blog post if they are just starting out, or have changed disciplines). Then you will look for another subject or small sample (e.g. five more graduate students in a different department), and see whether this pattern or this hypothesis still holds. If not, you will look towards commonalities, adapting the hypothesis accordingly. As this process continues, the theory develops.

Some have also argued that there is a tricky circularity to Grounded Theory. For it to work, in principle, you should know as little as possible around the research question and population, so that you reduce bias in interpretation. However, in many circumstances, it is also thought to be unwise to approach a research question without knowledge around the current literature. In other words, it’s a bit of a “chicken or the egg” situation. Regardles, grounded theory remains a popular (and powerful) option.

IPA is designed to understand the experiences of a subject (for example, a person) in relation to a major life event, experience or situation (which we refer to as a phenomenon – hence the “P” in IPA). These phenomena may range from those that are common (such as motherhood, or the results of a car crash) to those which are rare (for instance, a subject’s experience in a refugee camp).

IPA is subject-centred (focused on the experiencer), often only having a very small sample size. This means that, while researchers often do use coding systems like those common in QDA, it is important not to lose the depth of experience or meaning within the analysis.

While it is important for researchers to reflect on their subjective biases in all research, in this analysis it is critical. An example might be a researcher who was a victim of crime himself (when his hat was stolen) could insert his own feelings of frustration and anger into the way he interprets the experience of someone who was kidnapped. So, one has to be very self-aware when undertaking IPA.

No single QDA method is perfect

The value of QDAs lies in their potential to generate rich understanding about people, in a way that quantitative analysis could never achieve – so they’re powerful tools in your research arsenal. That said, as we’ve seen, no analysis is perfect. If only one methodology is employed, some (if not, most) of this richness could be lost. Some research bypasses this problem by using two or more of these methodologies (a technique known as triangulation), but this is, of course, quite time-consuming.

These approaches might all use similar coding and theme-generating techniques, but the intent and approach of each differ meaningfully. Therefore, coming into your research with a clear intention or question is very important when you’re thinking about which qualitative data analysis method to adopt.

In this post, we looked at the five most popular qualitative data analysis methods, namely:

These are certainly not the only approaches to Qualitative Data Analysis but hopefully, at this point, you have a better understanding of the variety of ways in which you can approach your qualitative data.

The next step, of course, is to begin your coding, using this clear intentionality. But that, I’m afraid, is for another post!