Research Bias 101: What You Need To Know

If you’re new to academic research, research bias (also sometimes called researcher bias) is one of the many things you need to understand to avoid compromising your study. If you’re not careful, research bias can ruin the credibility of your study.

In this post, we’ll unpack the thorny topic of research bias. We’ll explain what it is, look at some common types of research bias and share some tips to help you minimise the potential sources of bias in your research.

So, what is research bias?

For example, if you planned to research the effects of remote working arrangements across all levels of an organisation, but your sample consisted mostly of management-level respondents, you’d run into a form of research bias. In this case, excluding input from lower-level staff (in other words, not getting input from all levels of staff) means that the results of the study would be ‘biased’ in favour of a certain perspective – that of management.

Of course, if your research aims and research questions were only interested in the perspectives of managers, this sampling approach wouldn’t be a problem – but that’s not the case here, as there’s a misalignment between the research aims and the sample.

Now, it’s important to remember that research bias isn’t always deliberate or intended. Quite often, it’s just the result of a poorly designed study, or practical challenges in terms of getting a well-rounded, suitable sample. While perfect objectivity is the ideal, some level of bias is generally unavoidable when you’re undertaking a study. That said, as a savvy researcher, it’s your job to reduce potential sources of research bias as much as possible.

To minimize potential bias, you first need to know what to look for. So, next up, we’ll unpack three common types of research bias we see at Grad Coach when reviewing students’ projects. These include selection bias, analysis bias, and procedural bias. Keep in mind that there are many different forms of bias that can creep into your research, so don’t take this as a comprehensive list – it’s just a useful starting point. 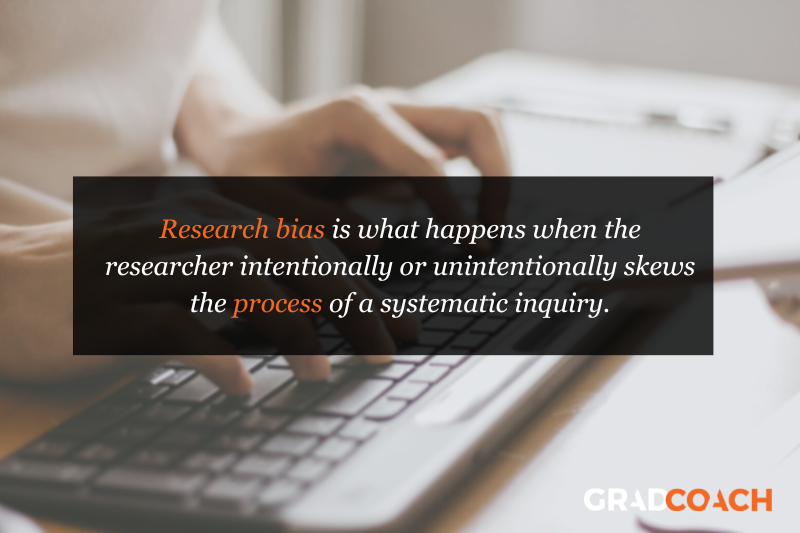 First up, we have selection bias. The example we looked at earlier (about only surveying management as opposed to all levels of employees) is a prime example of this type of research bias. In other words, selection bias occurs when your study’s design automatically excludes a relevant group from the research process and, therefore, negatively impacts the quality of the results.

With selection bias, the results of your study will be biased towards the group that it includes or favours, meaning that you’re likely to arrive at prejudiced results. For example, research into government policies that only includes participants who voted for a specific party is going to produce skewed results, as the views of those who voted for other parties will be excluded.

Selection bias commonly occurs in quantitative research, as the sampling strategy adopted can have a major impact on the statistical results. That said, selection bias does of course also come up in qualitative research as there’s still plenty room for skewed samples. So, it’s important to pay close attention to the makeup of your sample and make sure that you adopt a sampling strategy that aligns with your research aims. Of course, you’ll seldom achieve a perfect sample, and that okay. But, you need to be aware of how your sample may be skewed and factor this into your thinking when you analyse the resultant data.

Next up, we have analysis bias. Analysis bias occurs when the analysis itself emphasises or discounts certain data points, so as to favour a particular result (often the researcher’s own expected result or hypothesis). In other words, analysis bias happens when you prioritise the presentation of data that supports a certain idea or hypothesis, rather than presenting all the data indiscriminately.

For example, if your study was looking into consumer perceptions of a specific product, you might present more analysis of data that reflects positive sentiment toward the product, and give less real estate to the analysis that reflects negative sentiment. In other words, you’d cherry-pick the data that suits your desired outcomes and as a result, you’d create a bias in terms of the information conveyed by the study.

Although this kind of bias is common in quantitative research, it can just as easily occur in qualitative studies, given the amount of interpretive power the researcher has. This may not be intentional or even noticed by the researcher, given the inherent subjectivity in qualitative research. As humans, we naturally search for and interpret information in a way that confirms or supports our prior beliefs or values (in psychology, this is called “confirmation bias”). So, don’t make the mistake of thinking that analysis bias is always intentional and you don’t need to worry about it because you’re an honest researcher – it can creep up on anyone.

To reduce the risk of analysis bias, a good starting point is to determine your data analysis strategy in as much detail as possible, before you collect your data. In other words, decide, in advance, how you’ll prepare the data, which analysis method you’ll use, and be aware of how different analysis methods can favour different types of data. Also, take the time to reflect on your own pre-conceived notions and expectations regarding the analysis outcomes (in other words, what do you expect to find in the data), so that you’re fully aware of the potential influence you may have on the analysis – and therefore, hopefully, can minimize it. 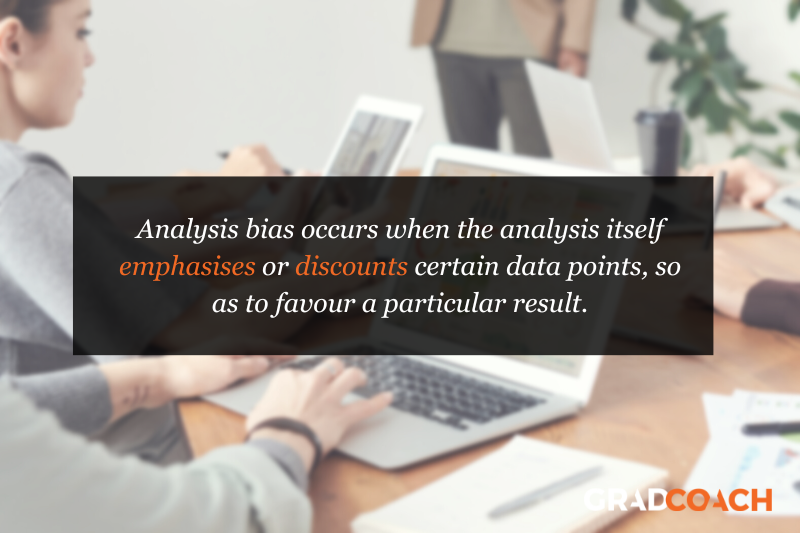 Last but definitely not least, we have procedural bias, which is also sometimes referred to as administration bias. Procedural bias is easy to overlook, so it’s important to understand what it is and how to avoid it. This type of bias occurs when the administration of the study, especially the data collection aspect, has an impact on either who responds or how they respond.

A practical example of procedural bias would be when participants in a study are required to provide information under some form of constraint. For example, participants might be given insufficient time to complete a survey, resulting in incomplete or hastily-filled out forms that don’t necessarily reflect how they really feel. This can happen really easily, if, for example, you innocently ask your participants to fill out a survey during their lunch break.

Another form of procedural bias can happen when you improperly incentivise participation in a study. For example, offering a reward for completing a survey or interview might incline participants to provide false or inaccurate information just to get through the process as fast as possible and collect their reward. It could also potentially attract a particular type of respondent (a freebie seeker), resulting in a skewed sample that doesn’t really reflect your demographic of interest.

The format of your data collection method can also potentially contribute to procedural bias. If, for example, you decide to host your survey or interviews online, this could unintentionally exclude people who are not particularly tech-savvy, don’t have a suitable device or just don’t have a reliable internet connection. On the flip side, some people might find in-person interviews a bit intimidating (compared to online ones, at least), or they might find the physical environment in which they’re interviewed to be uncomfortable or awkward (maybe the boss is peering into the meeting room, for example). Either way, these factors all result in less useful data.

Although procedural bias is more common in qualitative research, it can come up in any form of fieldwork where you’re actively collecting data from study participants. So, it’s important to consider how your data is being collected and how this might impact respondents. Simply put, you need to take the respondent’s viewpoint and think about the challenges they might face, no matter how small or trivial these might seem. So, it’s always a good idea to have an informal discussion with a handful of potential respondents before you start collecting data and ask for their input regarding your proposed plan upfront. 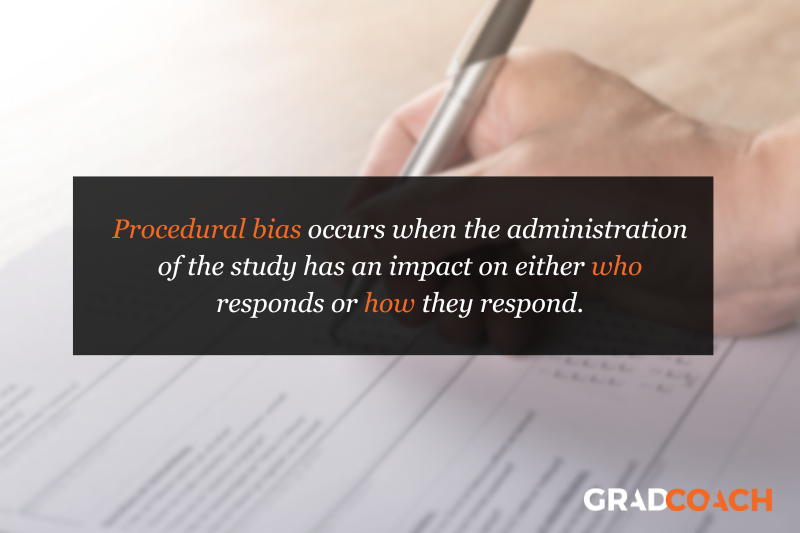 Ok, so let’s do a quick recap. Research bias refers to any instance where the researcher, or the research design, negatively influences the quality of a study’s results, whether intentionally or not.

The three common types of research bias we looked at are:

As I mentioned, there are many other forms of research bias, but we can only cover a handful here. So, be sure to familiarise yourself with as many potential sources of bias as possible to minimise the risk of research bias in your study. 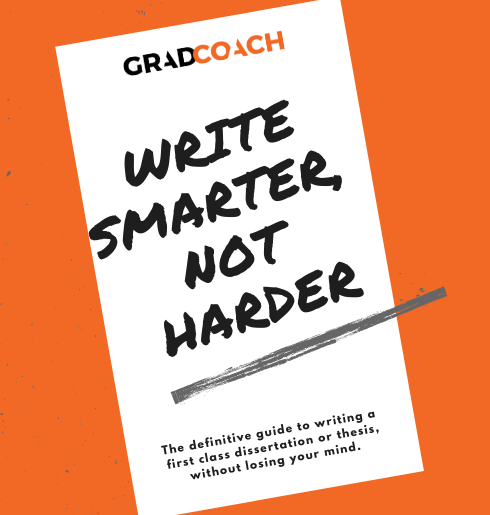