What (Exactly) Is A Longitudinal Study?

A Plain-Language Explanation & Definition (With Examples)

If you’re new to the world of research, or it’s your first time writing a dissertation or thesis, you’re probably feeling a bit overwhelmed by all the technical lingo that’s hitting you. If you’ve landed here, chances are one of these terms is “longitudinal study”, “longitudinal survey” or “longitudinal research”. Worry not – in this post, we’ll explain exactly: 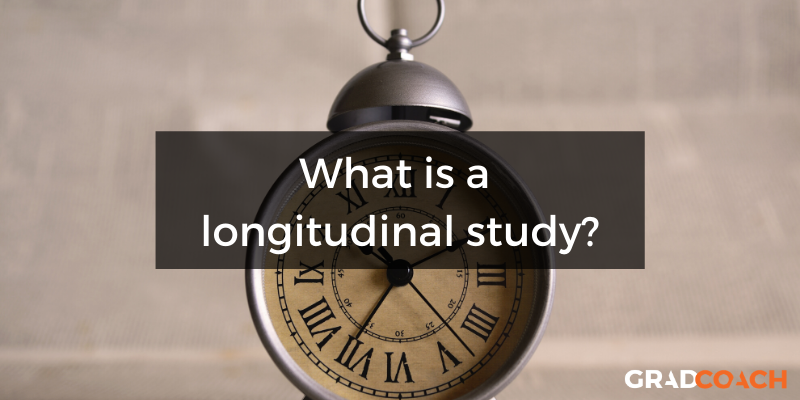 What is a longitudinal study?

The opposite of a longitudinal study is a cross-sectional study, which is a design where you only collect data at one point in time.

Here are two examples – one of a longitudinal study and one of a cross-sectional study – to give you an idea of what these two approaches look like in the real world:

Longitudinal study: a study which assesses how a group of 13-year old children’s attitudes and perspectives towards income inequality evolve over a period of 5 years, with the same group of children surveyed each year, from 2020 (when they are all 13) until 2025 (when they are all 18).

Cross-sectional study: a study which assesses a group of teenagers’ attitudes and perspectives towards income equality at a single point in time. The teenagers are aged 13-18 years and the survey is undertaken in January 2020.

From this example, you can probably see that the topic of both studies is still broadly the same (teenagers’ views on income inequality), but the data produced could potentially be very different. This is because the longitudinal group’s views will be shaped by the events of the next five years, whereas the cross-sectional group all have a “2020 perspective”.

Additionally, in the cross-sectional group, each age group (i.e. 13, 14, 15, 16, 17 and 18) are all different people (obviously!) with different life experiences – whereas, in the longitudinal group, each the data at each age point is generated by the same group of people (for example, John Doe will complete a survey at age 13, 14, 15, and so on).

There are, of course, many other factors at play here and many other ways in which these two approaches differ – but we won’t go down that rabbit hole in this post.

What are the advantages of
a longitudinal study?

Longitudinal studies and longitudinal surveys offer some major benefits over cross-sectional studies. Some of the main advantages are:

Patterns – because longitudinal studies involve collecting data at multiple points in time from the same respondents, they allow you to identify emergent patterns across time that you’d never see if you used a cross-sectional approach.

Bias – because longitudinal studies capture current data at multiple points in time, they are at lower risk of recall bias. In other words, there’s a lower chance that people will forget an event, or forget certain details about it, as they are only being asked to discuss current matters.

What are the disadvantages of
a longitudinal study?

Cost – compared to cross-sectional studies, longitudinal studies are typically substantially more expensive to execute, as they require maintained effort over a long period of time.

Slow – given the nature of a longitudinal study, it takes a lot longer to pull off than a cross-sectional study. This can be months, years or even decades. This makes them impractical for many types of research, especially dissertations and theses at Honours and Masters levels (where students have a predetermined timeline for their research)

Drop out – because longitudinal studies often take place over many years, there is a very real risk that respondents drop out over the length of the study. This can happen for any number of reasons (for examples, people relocating, starting a family, a new job, etc) and can have a very detrimental effect on the study.

Should I use a longitudinal
or cross-sectional study design?

Choosing whether to use a longitudinal or cross-sectional study for your dissertation, thesis or research project requires a few considerations. Ultimately, your decision needs to be informed by your overall research aims, objectives and research questions (in other words, the nature of the research determines which approach you should use). But you also need to consider the practicalities. You should ask yourself the following:

If your answer to any of these is no, you need to think carefully about the viability of a longitudinal study in your situation. Depending on your research objectives, a cross-sectional design might do the trick. If you’re unsure, speak to your research supervisor or connect with one of our friendly Grad Coaches.